24th May 2019
Posted by: Martin Pidsley
No Comments

The dramatic progress in car safety, emissions, efficiency and in-car tech since 1979 was revealed today by a special vehicle display at the 40th Society of Motor Manufacturers  and Traders (SMMT) Test Day. In a celebration of the evolution of the car, 40 models spanning 22 brands and five decades were brought together, underlining the rich heritage and neverending innovation of the automotive industry. 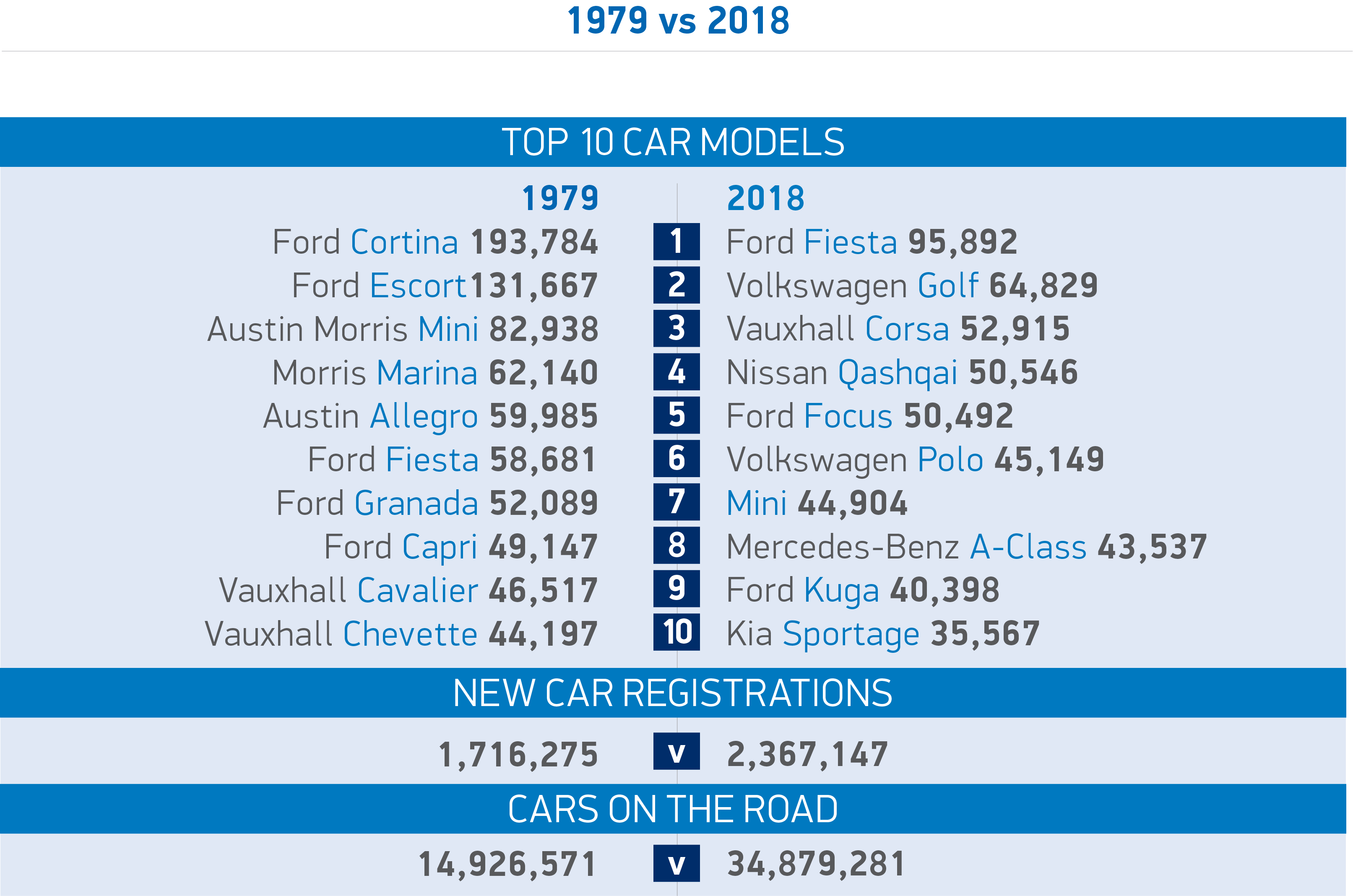 From the driver’s airbag, introduced in 1981, to electronic stability control in 1995 and reversing cameras in the 2000’s, the advances in systems designed to protect drivers, passengers and other road users have been extraordinary. Safety is the number one priority for car manufacturers, and the latest Advanced Driver Assistance Systems such as Advanced Emergency Braking and Collison Warning are now available on the majority of new cars, helping to prevent accidents and save lives.1

Emissions performance has also improved dramatically over the years – it would take 50 new cars to produce the same amount of pollutant emissions as one vehicle built in 1970.2 From catalytic converters, widely introduced to reduce carbon monoxide in 1993, to diesel particulate filters, which capture 99% of soot particles, in 2011, and selective catalytic reduction systems, which convert NOx into nitrogen and water in 2015, progress has been astounding. This is evidenced by the ability of the industry to meet the toughest ever emissions standard, including the world’s first on-road test. 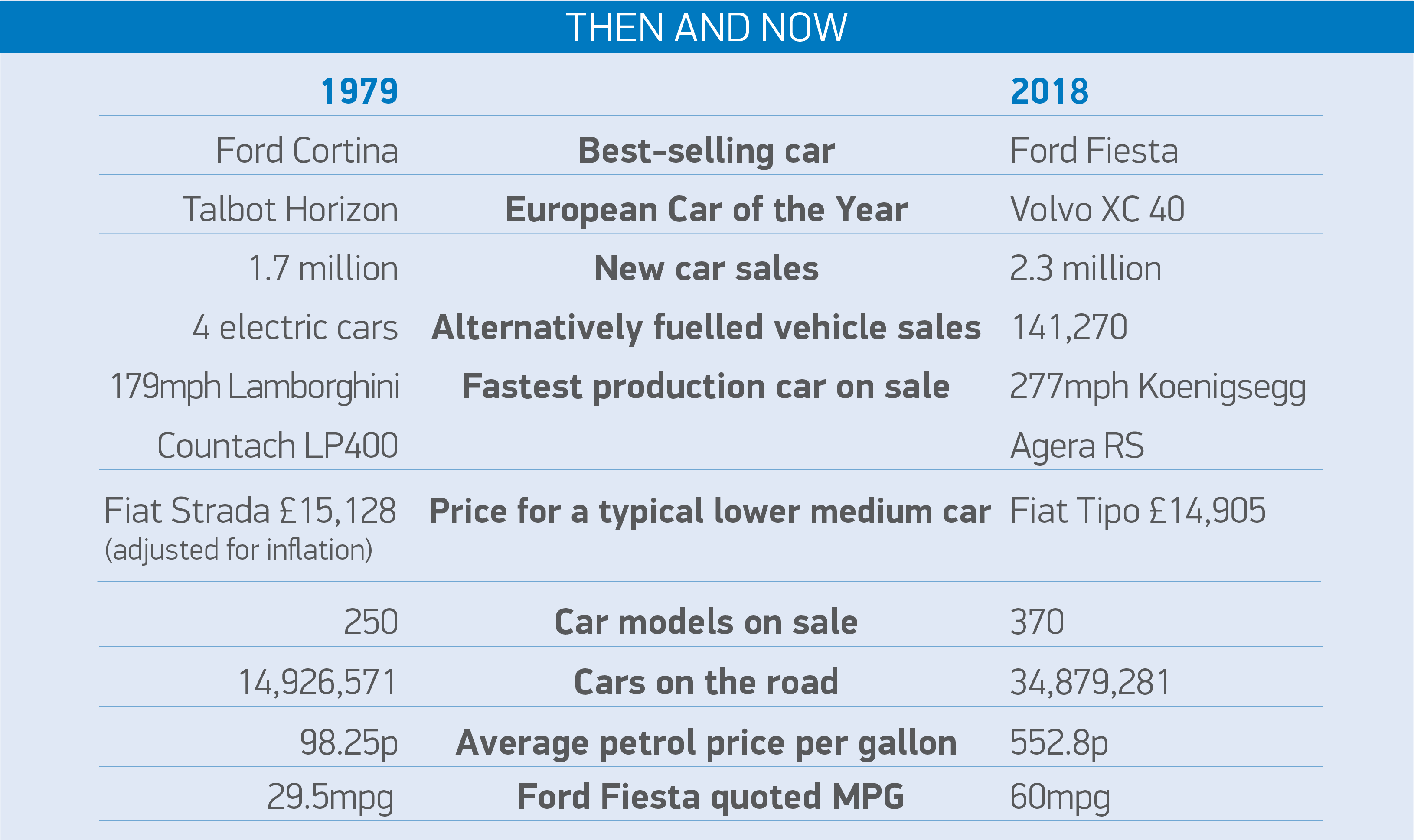 Enormous strides have also been made in reducing carbon emissions, with average new car CO2 down by -31.2% since 2000. Lightweight materials, including aluminium and carbon fibre, aerodynamic designs, turbocharging, engine downsizing and technologies such as direct fuel injection and stop-start – which cuts the engine when the vehicle is stationary and is now fitted to four out of every five cars sold – have all helped deliver huge fuel efficiency gains.3 A new car gets you almost 50% further on a litre of fuel than it did in 2000, helping consumers save money and reduce their environmental impact.4

Furthermore, where once there was a limited choice of powertrains and transmissions, today there is something to suit every driving need, with a range of manual and automatic gearboxes on everything from low emission petrols and diesels, to ultra low emission hybrids and plug-ins, zero tailpipe emission pure electric and hydrogen fuel cell vehicles.

Radical changes have also happened inside the car, with today’s cabins almost unrecognisable from those 40 years ago. From the first cassette players in the seventies and in-dash CD players and centre console carphones in the mid-eighties, to GPS satnav and Bluetooth, the driver experience has improved immeasurably. Today, the smartphone revolution and internet connectivity has led to the introduction of integrated systems such as Apple CarPlay and Android Auto, allowing drivers to safely access music, maps and services via their phones.

Innovation continues apace. Over the next decade, the rollout of a new generation of connected and autonomous cars will revolutionise our roads and society. Starting with technology such as Traffic Jam and Highway Pilot, where, in the right conditions, the car can take over the task of driving in slow moving traffic or at higher motorway speeds, and followed by cars that will drop you off and park themselves, the benefits are immense. By 2030, it’s estimated that 47,000 accidents will be prevented and 3,900 lives saved, helping to deliver an annual £62 billion boost to the UK’s bottom line.5

Back in 1979, cars featured the ground-breaking technology of the time – ABS, catalytic converters and cassette players. Fast forward to 2019 and we see even more sophisticated tech: autonomous emergency braking and automatic parking; connected in-car services; advanced petrol; diesel, hybrid, plug-in, battery electric, and even hydrogen powertrains. With such a diverse market, coupled with attractive finance options and competitive prices there has never been a better time to buy a new car. The future is even more exciting and, while George Jetson’s flying car might still be some way off, the next 40 years will see a seismic shift in automotive innovation.